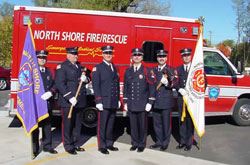 Organized in 2001, the North Shore Professional Firefighters Honor Guard consists of 25 Officers, Heavy Equipment Operators and Firefighters from the North Shore Fire Department. These individuals volunteer their time as well as invest in the Class A uniform to belong to the unit. The Honor Guard trains regularly in presenting of U.S. and State colors, military drill, ceremony as well as public safety promotion, retirement and funeral protocols and traditions.

The impetus for the formation of the unit was the passing of one of our own, North Shore Heavy Equipment Operator Ben DeStefanis on July 9, 2001. The Honor Guard performed a full fire service funeral. In 2004, the North Shore Fire Department lost two members, Firefighter John Harrington and Paid-on-Call Firefighter Kirby Vick. These events solidified the need and use for the organization. The Honor Guard took part in their funerals and will continue to be available for presentation of flags at memorial services and to post at funerals for current and former fire department members not only from the North Shore but the predecessor community's fire departments as well.

The Honor Guard is funded by the North Shore Firefighters Local 1440, donations and some fundraising efforts by its members. We are also a member organization of the Professional Fire Fighters of Wisconsin State Honor Guard.

Our members regularly participate in events ranging from presenting colors for the opening of sporting events to posting guard at flag folding ceremonies and funeral services statewide and nationwide. The Honor Guard has become recognized as a leader in the area and several of our members regularly teach and instruct not only at the monthly drills in and around the area but at region-wide multi-day seminars. We have also assisted several other departments both fire service and law enforcement with the formation of their own Honor Guards.

To inquire about requesting Honor Guard services or event participation contact the North Shore Fire Department Administration at 414-357-0113 and your call will be directed to the Honor Guard unit commander.