Services provided by fire/rescue/emergency medical departments are evaluated and valued by citizens and community members in a number of ways throughout the United States. Primarily, fire/rescue and emergency medical service responders such as North Shore Fire/Rescue are valued by members of the community for their capability to perform life and property saving actions. At times those services may be delivered prior to an emergency actually occurring in an effort to reduce risk, but commonly, members of the community seek service from a fire and emergency service organization in the time of need, when an emergency occurs.

In the minds of most community members, the time of need, or their emergency will not occur daily, but when it does occur, they expect a prompt response from professional responders that are qualified and capable of mitigating the emergency. Fire/rescue providers are graded on their service and performance in many fashions, but most often that evaluation is done by customers that utilize the service, although we are also graded by insurance companies that sell property insurance to residential and commercial property customers as a means of determining property insurance rates. Most insurance companies that sell property insurance throughout the United States utilize the Insurance Services Office (ISO) to provide that grading. ISO, an independent grading organization, provides a report on fire protection for communities under its Public Protection Classification Program for insurance companies that purchase their services.

Ratings are done on a scale of one to ten, with a one being the best rating a fire department can receive. In general, according to ISO, the price of fire insurance in a community with a good Public Protection Classification is substantially lower than in a community with a poor rating, assuming all other factors are equal. Additionally, the cost of fire claims per $1,000 of the insured property is proportionate to its Public Protection Classification Rating as demonstrated in the chart. 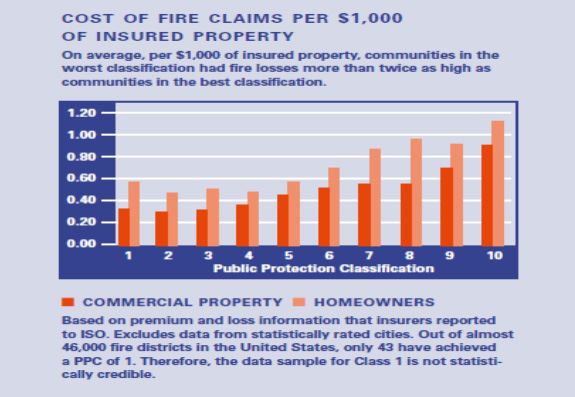 ISO develops their rating based on several components:

Each of these components is rated separately and then a total score is developed.

North Shore Fire/Rescue was able to increase its score over the 1997 rating in the area of receiving and processing of calls for emergency services, equipment carried on fire apparatus, training and water supply systems, but experienced a decrease in the scoring for distribution of ladder trucks, lack of existence of a reserve ladder truck and daily staffing of resources.

While much of the spotlight of provision of fire protection is on the firefighters providing service the efforts and investments of the member communities, their water departments and commissions, the North Shore Public Safety Communications Staff and North Shore Fire/Rescue's support staff should not be forgotten. As noted earlier, ISO grades the water supply system and the quality and inspection procedures of the fire hydrants in communities. Each community maintains their water infrastructure and fire hydrants. Their efforts allowed us to gain points over the 1997 rating in two of the three water supply grading areas. Additionally, North Shore Public Safety Communication's commitment to its critical infrastructure and staffing provided additional points in two of the three communication and dispatch areas.

Clearly, fire protection and emergency response is a team effort lead by a commitment of the citizens, elected officials and appointed officials to quality delivery of service, trained and qualified emergency responders and dispatchers with the equipment necessary to mitigate incidents and a strong, reliable water supply system.